A Northeast State of Mind

When Bruce and I decided to hit the beach this year, we wanted to try someplace new. Our family has gone to the Outer Banks, NC for years, but rentals there have skyrocketed, and they've priced us out of their market. Our first plan was to check out Gulf Shores, Alabama.

Yeah. That didn't work out. Thanks a lot BP. Waiting until the last minute to book something worked in our favor. Unlike some of our friends, we didn't have to fight with BP to get a deposit back.

So where did we end up? It had to be the Atlantic coast...again, thanks BP. We didn't want to drive all the way to Florida. North Carolina was just too expensive. We looked at several places in South Carolina and Georgia, but nothing grabbed us. Then Bruce remembered a trip he took as a boy to Ocean City, Maryland. Mapquest told us it was only an 11 hour drive, and a hotel right on the Boardwalk was having a "red, white, and blue" special. We had a winner, and I am now writing this from my hotel room in Ocean City. 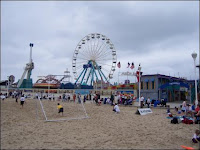 Ocean City is an entirely different experience from the Outer Banks. I could point to the obvious differences like the Boardwalk, a 24/7 circus right on the beach. My boys each brought a friend, and they're all loving it. An amusement park on the pier about half a mile down the beach boasts a roller coaster, slingshot, and giant Ferris wheel. Ripley's Believe it or Not (the 15 yr olds loved the hall of mirrors, while the 18 yr olds found it lame) sits next to a shop making saltwater taffy. In fact, every touristy restaurant and retail shop you could imagine adorns the 3 mile strip. Hooters is right next to our hotel, and the boys have already logged time there.

The Outer Banks are quiet. You have to get in a car and drive to find a souvenir shop or a restaurant. It's all about the ocean there. Here, the ocean almost seems like an afterthought. Even the places I've been in Florida don't measure up to the Ocean City Boardwalk in terms of pure, in-your-face tourist traps

Those differences are significant, but we chose Ocean City intentionally because of the Boardwalk. We can cut the boys loose, and they'll never get bored, AND they don't have to get behind the wheel of a car to find something to do.

The thing that really jumps out at me here are the people. They are almost exclusively northeasterners. When you go to Florida or the Carolinas, you see some folks from the northeast, but there are just as many, if not more, mid-westerners and southerners.

You wouldn't think a different demographic would matter all that much, but wow...just wow. A northeasterners' natural state of mind is just different than that of a southerner. The pace among northeasterners is faster, even on vacation. Everybody's in a hurry. People were scurrying up and down the Boardwalk like the henna tattoo place was gonna go out of business before they got there. You're on vacation people. Where's the fire?

In a Dunkin Donuts today, I saw a man taste his frozen coffee drink and explode, "I asked for DARK roast. DARK roast."

The poor girl behind the counter was from some Eastern European country and could barely speak English, but I believe the word "asshole" is universal. When our eyes met, I rolled mine, and her half smile told me she was thinking it.

My eldest and his friend told me they felt like they were in an episode of "The Jersey Shore." It's all good, though. They think it's cool, and so do we. Bruce talks to everybody. He's always curious about people. And in truth, most of the people we've talked to in the restaurants and the hotel have been lovely...once you get past that "why are you talking to me" thing northeasterners do.

Tomorrow, I'm going to take a book out to the beach...down by the water where the boardwalk sounds are drowned out by the surf. I'm going to park myself on my towel, slather on some sunscreen and read until I feel like doing something else. "Hurry" will not be a part of my vocabulary. I'm surrounded by a northeastern state of mind, but I'm from Kentucky, and I'm on vacation.
Posted by Kathy at 10:16 PM