The Cult of Disney 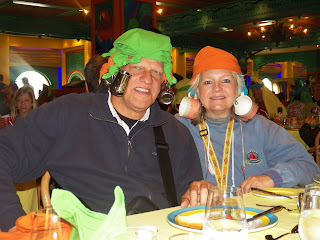 My friends, Linda and Robert, are bona fide, Kool-Aid drinking members of the Cult of Disney. They have good reasons to be, and I, for one, am glad they are because I got to go on a cruise to Alaska with them. I am not in the cult, also for good reasons, and I observed some things from the outside looking in.

During the pirate night extravaganza, a long-eared alien creature ran out to challenge Captain Hook and company.

Hannah looked at me like I had a second nose growing out of my forehead. “That’s Stitch!”

Oh, of course. How silly of me. How could I forget that classic Disney character, Stitch? 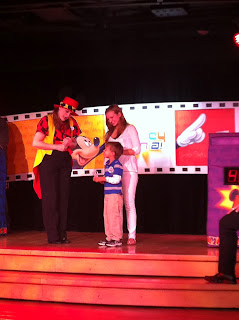 I’m so out of the Disney cult loop that I didn’t even recognize all of the Disney princesses. Oh sure, I could identify Snow White, Cinderella, Belle, and Ariel, but the pretty black girl in the green dress was new to me. I’m thrilled to see a non-white girl get Disney princess treatment, but I didn’t know who she was. (Yeah, yeah…Pocahontas and Mulan aren’t white girls, but seriously, are they ever included with the rest of the princesses?)

Speaking of Disney characters, cult members go to every show on the cruise. Our evening ritual was drinks in The Outlook Café or Diversions (yeah, that’s Disney-speak right there), show at 6:15, and dinner at 8:30. I’m not complaining. Nobody puts on a show like Disney, and honestly, who among us doesn’t feel something when the music swells and a powerful voice belts out “The Circle of Life?” Add a couple of glasses of wine and you have a freaking deep moment.

We went to Opening Night, The Golden Mickeys, Toy Story, and Disney Dreams. The productions rivaled anything I’ve seen on screen or stage. Amazing costumes and special effects, brilliant singers and dancers, and over-the-top acting all combined to delight the audience. Even our group’s 16 year-old contingent left the boys and the teen club to catch the show each night.

I’m not gonna lie. I laughed. I cried. I sang at the top of my lungs.

They’re good at this cult thing. They built the tension toward the end of almost every show in anticipation of the arrival of the great one himself, and when Mickey finally entered the stage, I found myself cheering just as loud as the kids.

Nick and I tried to wear our non-cult membership like a badge of honor, this pic to the contrary. 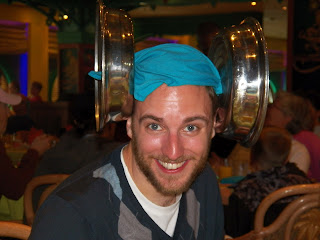 In Nick’s defense, he has a child who was delighted by his participation in the madness. 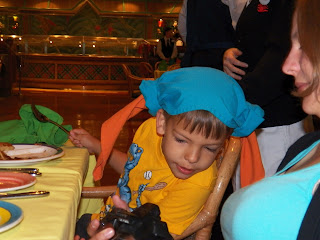 At one point, though, during the parade of nations at the end of our Animator’s Palette dinner (OMG! I think I speak Disney now!) after the black and white room became a Technicolor dream and Mickey appeared in his Fantasia wizard’s garb, I leaned over and said, “They’re sucking me in, Nick!”

He clasped my hand and said, “Be strong, Kathy!” I tried, but it was hard!

Every Disney employee or “cast member” is Walt’s personal emissary. They are so friendly it makes your teeth hurt, and I’m no jaded, abrupt Northeasterner. I’m from the South for heaven’s sake. We had the same servers every night at dinner, Yansen and Recon, and they knew our names before the first meal was over. One evening, I asked for ketchup, and instead of handing me the bottle, Recon set a small plate down and painstakingly poured the ketchup in the shape of mouse ears. I must have worn an expression that said, “Seriously?” because she laughed, but she didn’t stop until I had perfect tomato-y Mickey ears for my fries.

While we were at dinner, the magic Cinderella mice entered our staterooms to turn down the bed and leave swans (or maybe a cobra?)… 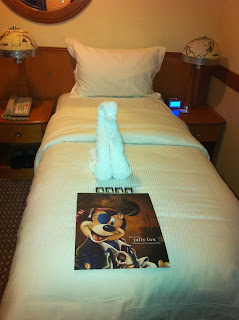 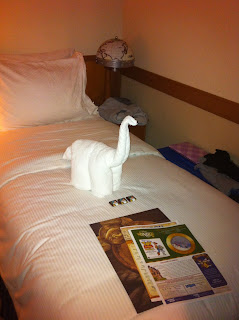 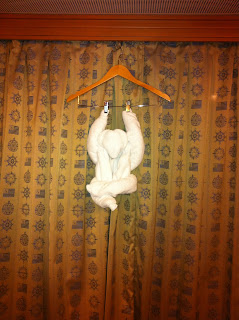 Linda was so taken with the towel animals that she dragged Hannah, Kaitlyn, and me to a towel-folding class. 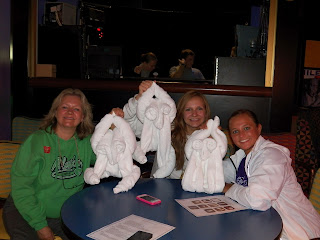 I took pictures and repeated instructions as Linda spent most of the time talking over the nice lady trying to teach her. 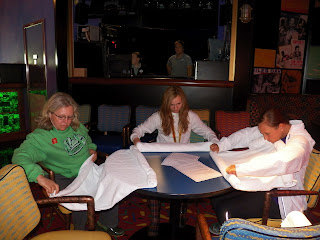 Even the Disney sub-contractors who ran the excursions were enthusiastic and friendly. This became apparent during my only non-Disney contracted excursion. Victor and I wanted to whale-watch while Linda and her crew were shopping, so we bought tickets after we disembarked. At every port, there were all kinds of folks trying to sell you something. The actual excursion was great, and we did, in fact, see the whales we paid to see… 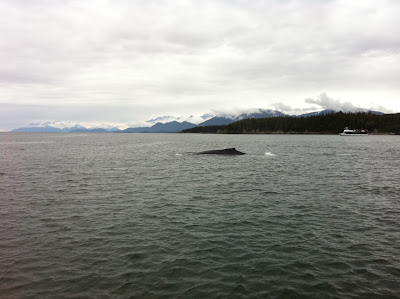 …but holy cannoli, the tour operator was not in the Cult of Disney. He was everything Disney is not. You might even say he was the Anti-Mouse. This is John. 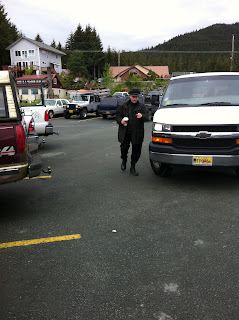 He was transplanted from Yonkers, but he was fond of slipping into a fake Russian accent. Why? I have no idea. Southeast Alaska is quite far from Russia, and John’s dueling accents were jarring.

This was our opening conversation. (I made the mistake of smiling when I greeted him):

“I’m not from Nebraska.”

“Yeah? Well you have that Rebecca of Sunnybrook farm look.”

Victor had only known me four days at this point, and still, he almost spit his coffee all over the pavement. Rebecca of Sunnybrook farm indeed.

Where our Davidson Glacier guides regaled us with tales of bears and wolves and the road kill club, John had this to say about life in Alaska. “This place was built on gold and greed and lives in its past glory. Everyone here is depressed. We drink ourselves to death or commit suicide. Oh yeah, there’s an eagle estuary on your right. But anyway, Juneau has the highest per capita rate of suicide in the nation.”

John never stopped talking in his Yonkers/Russian accent, and Victor and I were crying by the time we got to the marina. We didn’t realize we had paid for whale watching AND a comedy show. The Anti-Mouse piece de resistance was when we were exiting the shuttle, and John said, “See ya, Salsa!” to the gentleman from Phoenix. An audible gasp escaped the two young Disney cast members who had the morning off and had bought tickets to see the whales.

So John was the counterbalance to the Stepford friendliness of Disney’s employees. When I ran in the morning, the same maintenance guy was always on deck sweeping water, straightening furniture, whatever, and every time I passed him, he stopped working and said hello. And I mean every time…every single lap. After the fourth or fifth lap, it became funny, and I couldn’t say good morning without laughing. He was from Indonesia, so I’m not sure if he understood why I was in hysterics at his greeting, and that brings me to another point…

Every Disney cast member on the cruise was from some foreign country. The only American employees were Jimmy, the cruise director, and a few ship’s officers who were introduced on opening night. Most of the workers were from Eastern Europe or Southeast Asia. They had interesting stories and were willing to share them with us when we asked. Many of them were saving up to start a business of some sort back in their home country. Several were married to other cast members.

One night toward the end of the cruise, the night of the epic waves I think, we were sitting in Diversions, watching the light fixtures swing back and forth when Nick decided to ask our server a personal question.

We all sat a moment in stunned silence trying to process that, and then I think we all said the same thing at the same time in the same incredulous tone. “You make $13.50 for the WHOLE week?”

Nick, “Could you tell me who I can punch in the face for you?”

The guy laughed and went on about his business while we tried to sort it out. The ship is registered out of Nassau, Bahamas, so minimum wage laws don’t apply. Room and board was included for employees and Disney is aggressive in encouraging guests to tip well. A 15% gratuity was added to every drink we bought, and envelopes were left in our staterooms with instructions for tipping the housekeeping and wait staff. But still…

Hannah, a devout Disney cult member, said earlier in the trip that she would like to work for Disney someday. I think she was rethinking that after our conversation with the waiter. However, she still wants to get married at Disney World, so it didn’t disillusion her too much.

Shady employment practices aside, it’s hard not to at least sip the Kool-Aid. I skipped the character breakfast, but I did wear the pirate bandanna. 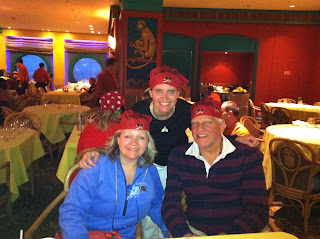 I didn’t recognize Stitch and the pretty black princess, but I know every word to “Can you Feel the Love Tonight.” I didn’t learn how to make towel animals… 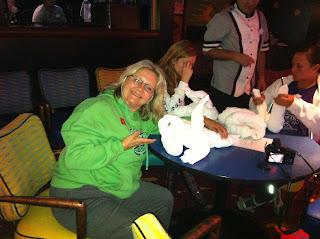 …but I did learn how to make a Cadillac margarita. 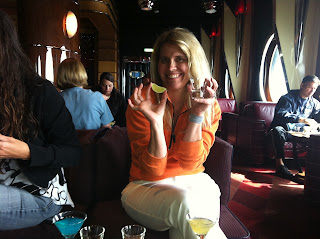 I’ll never achieve gold status, but I’d go on another Disney cruise in a heartbeat.
Posted by Kathy at 3:29 PM

Email ThisBlogThis!Share to TwitterShare to FacebookShare to Pinterest
Labels: humor in the minutia, The Alaska Series