You Can Go Home Again

Some people never leave high school. You see this refusal to “graduate” in adults you meet from time to time. They are still hanging on to old victories and wounds, and their current relationships are driven by who they perceived themselves to be when they were teenagers.

I am just the opposite. I left high school and my home town and never looked back. Until the advent of Facebook, I only kept in touch with a couple of people, and then only sporadically. It wasn't a determined effort to escape anything, at least not consciously. It was just that classic road diverging in a yellow wood. I loved my college town, married my college sweetheart, and as way leads on to way, life never brought me back.

Thirty years have elapsed since I left high school, and we like to mark those zero year anniversaries with reunions. This is the first one I've been to since the ten year mark. The ten year reunion was fun, but none of us had lived enough at that point to let go of whatever cliques and groups and biases we still clung to.

Thirty years is time to experience success and failure in careers, in relationships, and in just being human. We know who we are, and most of us have left those old biases behind. We've watched each other’s lives play out on Facebook. We've known each other in different contexts and changed our perspective. The popular girl I only interacted with in passing in high school provided exceptional nursing care for my mother in the last months of her life. I hugged her with real appreciation last night.

Yeah...thirty years is enough time. Things are different now. I’m different now. So why was I conflicted about even going and nervous as I got ready Saturday night? I’m not one to obsess over clothes, but I took three outfits with me when I left for my dad’s house Saturday morning…a dress, two different blouses, and two pairs of black pants in different sizes, just in case I was feeling fat.

My stepmom helped me decide which outfit to wear, and then I made her promise she was telling me the truth about how I looked. The whole time I was asking myself why I cared so much. I don't stress like this when I go out with my friends at home. I hadn't seen most of my classmates in 30 years, and it was unlikely I would see them again anytime soon. The people whose opinions mattered to me wouldn't care or notice if I was wearing my fat pants. They would just be happy to see me.

But there it was…I did care, and I was nervous. Sigh…

Maybe none of us leave high school.

As usual with worry, it was wasted effort. When I arrived, I immediately saw people I knew and found myself hugging everyone and genuinely smiling. The boy who aggravated me almost to tears our freshman year said hello to me last night by proclaiming he wanted to marry me when we were in school. And just like that I was laughing. The annoying boy has become a bombastic and hilarious man.

When I realized I wasn't the only one who had aged, I became more relaxed. Some people were easier to recognize than others. Thank god for name tags. A couple of times, I looked at my friend, Lisa, and said, “Holy shit!” when I figured out someone’s identity. Other people recognized me because I was attached at the hip to Lisa and Stacey just like I always was. 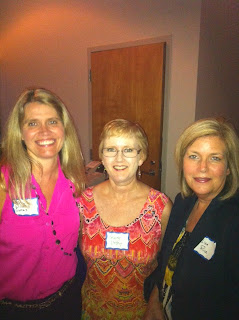 I had no trouble recognizing Chuck. 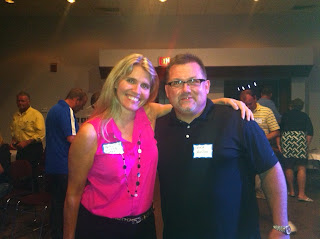 He has been my friend since we roamed the halls of West Louisville Elementary School. Our moms took turns carpooling us places because we lived close to each other out in the middle of nowhere. Later, when we had driver’s licenses, we drove each other around. Everyone landed at his house after prom, and once, his awesome mom took a whole group of my girlfriends to Evansville to see Rick Springfield because our moms wouldn't let us drive that far by ourselves.

I should have recognized the guy that sat down across from Lisa, Stacey, and I while we were eating (Dinner included mutton sandwiches from Moonlight BBQ. You’re jealous. I know.), and proceeded to make us play twenty questions to figure out who he was.

He stared at me. It was disconcerting.

“I’m looking at your face, not your name tag, and I know exactly who you are.”

I glanced at Lisa, but it was clear she didn't know either. Don’t judge us. Seventeen and forty-seven are a far piece apart.

“Why aren't you wearing one?”

“I’m a firefighter, but you would have never guessed I would be one in high school.”

Not helpful. “Did we have classes together?”

“All of them. I was in the advanced classes with you.”

“So you are a really smart firefighter?”

He clutched his heart dramatically. “I think I love you more now than I did then.”

I was stumped. I had lots of friends in high school, but I was never the belle of the ball, and I absolutely didn't have lovesick boys chasing me around. I was quiet and tended to feel awkward around boys back then.

“No, but we were in a car wreck together.”

And then of course I knew. Lisa whispered his name as his 17 year old face materialized in my head. There were six of us in a Honda built for four. I was straddling the stick shift between Darren, who was driving, and Lisa, in the passenger seat. There were three more guys in the back seat, including Mike, whose name I had just remembered.

“We were coming back from Pizza Hut, and Darren missed the curve!”

Darren’s car crumpled like a tin can, but all six of us walked away from it with no injuries. We must have had an angel on our shoulder that night because we were acting like fools.

“So if you loved me so much, why didn't you ever ask me out?”

“You were all about Darren. There was no point.”

I suppose there was some truth in that statement, but not in the way he thought. I posted my Darren story a couple of years ago, and you’re welcome to read it here. In chatting with people last night, I was surprised at how many people never knew who Darren really was. I was also happy to hear that a group of guys had gone out and visited his grave. I would have liked to have paid my respects as well. I did love that boy.

Some of my friends were missing simply because life got in the way. I see them on Facebook, but I would love to see them in person.

Speaking of Facebook, it provided great conversation starters. I knew that Kevin lives in Chicago, has beautiful dogs, and is a connoisseur of fine beer. Sandi lives in Arkansas and rides a Harley. Jeff still lives in Owensboro, but he just started a new job.

I knew my classmates had interesting talents, and last night I got to experience some of them. Molly sang.

She is a bonafide belly dancer and has a studio in Lexington. After she and her male counterpart danced for us, they invited people to dance with them. I couldn't do the belly thing, but I did get my hips going for a minute.


Teresa invited me to check out her studio, and I’m thinking belly dancing for beginners might be fun.

The DJ’s set was heavily skewed to the 80’s, and we danced to Kool and the Gang, AC/DC, and Prince. He did throw a few current songs in and when “Blurred Lines” inevitably started to play, my bombastic friend yelled “SHE WAS A GOOD GIRL” repeatedly in my face.

The night ended with more hugs and promises to keep in touch. Facebook will help, but I’m guessing it’ll be a while before we see each other again. I won’t stress over it next time. The memories we made this weekend are warm. We've made lives for ourselves. High school is small in the rearview mirror, and the only direction you can go is forward.


**Sandi was extremely gracious in letting me use her pictures. She has a blog that you can check out here.

Email ThisBlogThis!Share to TwitterShare to FacebookShare to Pinterest
Labels: sharing the joy