My Drug of Choice

Every year I do a project with my students in which they translate the theme and mood of a book they've read independently into a piece of abstract art. We start by reviewing some basic elements of visual art. I teach them a four step process through which they can write an intelligent interpretation of a painting.

We begin with representational art. They have a lot of fun with Picasso's "The Old Guitarist."

Then we graduate to abstract art. I start with Jackson Pollack. 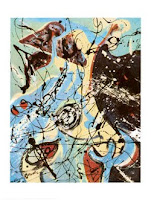 We look at Mondrian, Kandinsky, and others, but they respond most viscerally to Pollack. I always get the requisite, "My little sister could have painted that." In fact, I want them to say something to that effect because it gives me the opening I'm looking for.

The difference between simply slinging some paint around and real abstract art is intention. What was the artist trying to convey? What was inside of him screaming to find a way out? We use our four step process, and suddenly, teenagers are writing insightful interpretations of Pollack. Nobody gets angst better than a teenager. When they start to see what Jackson Pollack has communicated, they respect him.

That's the trick for any artist, isn't it. How do you make someone understand your vision? Feel what you feel? Think of the best book you ever read. You love it because it made you feel something. You had a moment of communion with the text, with the artist.

My favorite moments as a writer are when I know I've translated a real emotion into words that will move the reader. When my very first beta reader, Amanda, talked about a scene in Sapphire Sins, she clutched her chest and told me she cried. She couldn't have given me any higher praise. In the sequel I've temporarily abandoned because of a cohesion problem I can't wrap my brain around, there is one scene of which I'm particularly proud.

This song was my inspiration. (Yeah, I totally wanted to play with my new toy.)

Let It Die - Foo Fighters
My character moved from sadness to rage, and as she became angrier, so did I. By the time I reached the end of the scene, I was pounding the keyboard like I had a grudge against it. The song ends with a primal scream and so does the scene in a manner of speaking. Finishing that scene produced an intense high that only comes with creating something worthwhile.

When my students successfully interpreted Pollack's work and appreciated it, they felt a version of that high. When you read a book you love, you get a contact high from the writer's accomplishment. If it's cold and snowing where you are, then I highly recommend spending the weekend with a book, a song, or some other work of art and getting totally wasted. :)

Email ThisBlogThis!Share to TwitterShare to FacebookShare to Pinterest
Labels: writing