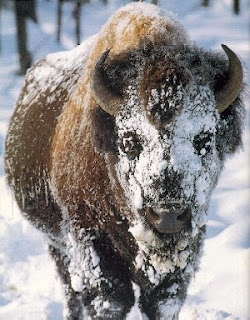 My closest friends understand their lives are fodder for my blog. Case in point: Linda, texted me from Jackson Hole, Wyoming where her family was vacationing over the holidays. "I have major blog fodder for you." Since she's game, here's her story.

Linda's husband, Robert, is all about adventure. He's done the Grand Canyon several times, rafting and hiking out and hiking rim to rim. Later this year, when his friend, Martin, tackles Mt. Everest, Robert is climbing as far as base camp. In this spirit of adventure, he took his family on a snowmobile expedition of Yellowstone Park.

Just thinking about Linda on a snowmobile makes me snicker. Outdoor sports are not her thing. One of her daughters is an avid soccer player, so Robert got them tickets to a pro soccer game in St. Louis last summer. Linda sat in the car with the AC because "It was too hot." When she spent five minutes as the Sports Information Director (Oh, the irony!) for a very small college in eastern Kentucky, she referred to baseball as the sport they play "with hard little balls." So it's not surprising that when Linda's snowmobile broke down, she was more than happy to ride behind someone else. The terrain was beautiful, but driving was "a pain in the ass."

They travelled about 60 miles a day for three days. (Again, typing those words makes me shake my head in disbelief because it's Linda we're talking about.) Their guide was a "true, don't-tread-on-me, gun totin' Marlboro Man." His instructions were clear. Stay on the road in a single file line, and give the buffalo a wide berth. They are dangerous and will charge when threatened. Good advice for the novice outdoorswoman.

Linda's next move? Leave the road and antagonize the buffalo.

The buffalo were minding their own business on the other side of the road. The first two or three snowmobiles in the column drove past them without incident. Linda was backseat driving her snowmobile. She repeatedly admonished the person in the front to "Watch out! Watch out!" Thank god she was there, or her partner might never have seen the massive brown beasts against the background of white snow ten yards away.

Her partner heeded Linda's warning and swerved away from the animals. The right runner of the snow machine left the road, and Linda and her partner ended up in a culvert pinned underneath. The whole column of snowmobiles came to a halt, and the buffalo stared curiously menacingly at Linda. Supposedly, her leg was pinned under the machine, but she also admits to being so encased in winter gear that she floundered on the snow like Ralphie's brother in A Christmas Story. Either way, I'm sure she scared the crap out of the buffalo when she began to shriek.

Robert was forced to leave their youngest daughter alone in harm's way to calm save Linda. Meanwhile, the Marlboro Man hollered at them to "Get those machines moving!"

"When the Marlboro Man was scared, I knew I was going to die."

Robert got Linda back on her feet, and several men got the snowmobile upright again. The Marlboro Man hustled everyone back on their machines, and they travelled a mile or so down the road before stopping again to assess the damage. The snowmobile was fine. Linda and her partner were physically okay. The bulk of the damage appeared to have occurred in Linda's psyche. Linda informed Robert that "she was done." They made their way back to a quaint little western town, complete with a saloon with swinging doors. I'm pretty sure it was Linda's first stop.

I asked her if she had an aversion to outdoor adventure as a result of the incident. Her response? "I'm fine with the outdoors. I have a major aversion to near death experiences!"

Ah Linda! The embodiment of True Grit.
Posted by Kathy at 5:53 PM