Spring Break is winding down, and I'm preparing for that 8 week sprint down the stretch to the finish line. The week has been both relaxing and productive. I did a lot of writing, and I'm happy about that. I spent the last couple of days visiting with my in-laws who were in from New Hampshire.

They visit us twice a year, once in the spring and once in the fall. The fall visit revolves around football (everything revolves around football in the fall), so in the spring we try to find some interesting local flavor activity. We've toured bourbon distilleries, done the wine tasting at Elk Creek Vineyards, gone to Keeneland, visited the Horse Park, and watched countless baseball games. Honestly, we were out of ideas and didn't really have a plan for this visit.

Our problem was solved when Janet saw an ad for the Central Kentucky Home, Garden, and Flower Show. I live here, and I didn't know about the Home and Garden Show. I am the Grim Reaper for green and growing things, so garden and flower shows don't appear on my radar. But hey, I didn't have a better plan, and an early dinner in Lexington sounded good, so what the hell.

The Central Kentucky Home, Garden, and Flower Show takes place at Rupp Arena and the Lexington Convention Center. I mention this because either one of those spaces alone is big, but this show fills both of them, plus the outer halls, and smaller meeting rooms in the Convention Center. Every imaginable vendor for anything you could possibly want in your home or garden is there. I told Bruce it kind of felt like a really big Lowe's...a Lowe's you have to pay to enter.

Yes, that's right. One has to pay for the privilege of having home and garden pitch men sell you their fantabulous products. $7.50 per person. No discounts for senior citizens. Only kids 14 and under get in free. I'm admitting right here in public. We totally lied about our youngest son's age (my oldest laughed derisively when I asked if he wanted to go). We were pushing it too because young son is quite tall...actually he's the tallest person in our family. The ticket lady appeared bored by it all and just waved him through, so my guilt at lying was partially assuaged by her lack of diligence.

Young son was actually the most enthralled by the whole thing. The pest control folks had a collection of live critters, and my son delighted in freaking his mother out with a tarantula. I'm still shuddering. Then he found a vendor selling $700 beanbag chairs. 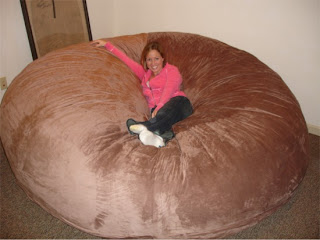 Yeah, it's cool. The vendor even encouraged us to take a running leap and jump on it. Of course he did. He knew the customer was my son, and asking a teenage boy to take a flying leap into a giant beanbag is just good salesmanship. Cool or no, I ix-nayed the beanbag chair.

Then we saw the people selling some sort of magical elixir that leaches all the toxins in your body out through your feet. I have no idea what this has to do with either a home or a garden, but there they were. One soaks one's feet in this clear liquid that turns a revolting shade of brown after 20 minutes. The schmutz in the water is proof the toxins have been released. As soon as the salesman said it was great for athletes, my son was hooked. For the special convention price of $20, he could try it out.

Ummmm...that would be a no.

I was the Queen of No. No $700 beanbag, no $20 toxin-leacher, no free massage, and no teeth whitening treatment. My issue with the massage and the teeth whitening were the long lines. I was all about looking and moving on.

Young son was entertaining to have along. He made me choke when he told the guy selling smokers that his extra-large smokehouse looked like the concentration camp ovens in his history textbook. Then there was the rousing game of "which of these would you rather find in your bed" at the pest control place. My choices were giant hissing cockroaches, the aforementioned tarantula, and a scorpion. The cockroaches won that contest hands-down...or six creepy-crawly legs down.

I was tempted by the steam mop. The guy demonstrating them was the same guy who sells them on QVC (or so he said), and he was very persuasive and the demo was all kinds of awesome. Janet bought one and had it shipped to New Hampshire. As I was reaching for my credit card, I remembered I hate cleaning with a blue passion, and why in the hell would I spend $150 on a steam mop? But oh, he was good. Bruce actually shook his hand and said, "Great job, man." From Bruce, high praise indeed.

I also decided that at some point in my life I absolutely must have a gazebo with a gas-powered fire pit. Even with the special convention price of $6500, I walked away. I know, only $6500. What was I thinking?

I got my rings cleaned for free, bought a raffle ticket for a 2010 red Camaro from the state police, and registered to win a Big Green Egg. Other than the raffle ticket, the only thing I bought was a magic hair clip. The lady twisted my hair into three different elegant updos with this one clip. I've yet to recreate any of them since I got it home.

The day was interesting, and frankly, I was shocked at how many people are willing to pay to listen to a sales pitch. The place was packed. I guess everybody was looking for a great deal, but $6500 gazebo fire pits notwithstanding, I just didn't see it.

Remember this blast from the past? This is what the toxin-leaching elixir brought to mind.