Good Morning! Although I started my day sluggish, choosing pseudoephedrine side effects over hacking and draining (ah, Spring!), I am wide awake now. I am heart pounding, gasping for air, fight or flight adrenaline surge awake.
I usually walk through my morning routine on auto-pilot. Unless Bruce has a crazy early morning, I'm the first one up. I turn on the early morning news, stumble into the shower, get dressed, and go in and out of young son's room 25 times until he gets his snarly, groggy self out of bed. Then I go downstairs, make lunches, feed the dog and cat, and I'm out the door. Today was moving along like every other day until it came time to feed the dog. 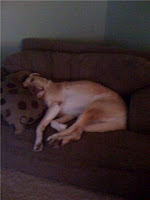 I should note at this point that we've had a mouse problem this winter that no amount of traps baited with tantalizing tidbits has been able to resolve. I refuse to use poison because although Biscuit makes me crazy on a regular basis, I love her, and she eats anything she can get her paws on. She even sprung a couple of the traps, trying to get to the peanut butter. So the mice have prevailed.
Can you see where this is going?
The 40 pound bag of dog food is in the garage. I fill Biscuit's bowl in the kitchen every morning before I leave. The bag is only about a quarter full right now, so this morning, I had to reach way down to the bottom to fill the scoop.
As I mentioned, I'm having allergy issues, so my eyes were a little watery and I had a coughing fit about the time I pulled the scoop out of the bag. Something looked off, but I was hacking up a lung (lovely image, huh?), and I didn't really see what it was at first. The scoop was overflowing, and some of the dog food was in my hand. Except it didn't feel right. Dog food is not furry. I was on the steps leading into the kitchen when I realized what it was.
There was a dead mouse IN. MY. HAND.
I screamed like a bimbo in a cheesy horror flick. I flung the scoop as far away from me as I could get it. Kibbles and dead mouse rained down in both the garage and the kitchen like rocks from that volcano nobody can pronounce. Biscuit was dancing around me in circles and barking, and I couldn't stop screaming. And coughing. And screaming.
Ugh! I'm still shuddering. At some point, I knew I needed to stop screaming. It was making my cough worse and my throat hurt. But there was a dead mouse IN MY HAND!!!
Bruce staggered into the kitchen in a panic. "What's wrong!"
"There was a dead mouse IN MY HAND!"
"Geez, Kath. You scared the crap out of me."
"I scared you? There was a dead mouse IN MY HAND!"
Bruce looked down at the floor. "So that's why they weren't interested in the traps. It's fat."
"I had a dead mouse IN MY HAND!"
"Don't let Biscuit get it."
Then he LEFT! He went back upstairs to get ready for work, and I had to deal with the big fat dead mouse on my floor. And I had to deal with it. Biscuit was sniffing at it with considerable interest. Where are the knights in shining armor when you need one?
I grabbed a paper towel and picked it up by the tail. It was in full rigor mortis. Ugh!!! I carried it out to the trash bin already at the curb, shuddering and making noises of disgust in between coughs. Then I scalded my hand in hot water and used half a bottle of soap.
Really, there's not enough soap in the world to make me feel better about having a dead mouse in my hand. I've stopped twice while typing this to use the hand sanitizer.
So what have we learned? Don't leave an open bag of dog food in the garage. I'm stopping at the store on my way home to buy a trash can with a top that seals and a new bag of dog food. I can't give Biscuit dead mouse dog food.
Actually, I might buy more traps, and this time I'm baiting them with kibble.
Ugh!!!!
Posted by Kathy at 7:48 AM