Many waters cannot quench love, neither can the floods drown it.

Emily and my brother, Allen, got married last Saturday, May Day, in Nashville. Yep...Nashville. Last weekend. Well, actually, Franklin which is a community just south of Nashville on the Harpeth River. They planned a beautiful outdoor wedding in a picturesque garden with blooming flowers, a coy pond, and a gazebo right out of a romantic movie.

The weekend weather started promising, a kind of mean tease considering what was to come. Friday was gorgeous, eighty degrees and not a cloud in the sky. Bruce and I took advantage of it. We loaded up the boys early and hit Nashville in time for lunch. We went to Roberts Western World, a honky tonk on lower Broadway.

My boys listen to hip-hop and hard rock respectively, so a honky tonk was an alien landscape for them. The look on my eldest son's face as he listened to the folk singer on stage alternated between disbelief and horror. Torturing him musically provided serious amusement (as did the folk singer's lyrics). I was very glad to see on Roberts' blog that they came through the flood mostly unscathed, and the music hasn't stopped.

Then Saturday came. Holy cow! We woke early to a torrential downpour, a downpour that still hadn't stopped when we left Sunday afternoon. I have never seen it rain so hard for such a sustained period of time.

Bruce and I ran to a nearby mall Saturday morning with my stepmom, Patricia. We had each forgotten a few vital wardrobe pieces. As we drove into the mall parking lot, we saw the first of dozens of submerged cars we would see that weekend. A Lexus was parked in a corner of the lot that formed a water-filled depression. Water had risen to the doors. We shook our heads in collective disbelief, but shook it off as an anomaly. We should have gotten a clue.

The rain continued all morning. We drove back into Nashville to my brother's house for a brief visit before he had to leave for CJ's (the wedding venue). The drive back to Franklin was hairy. Traffic slowed to a crawl as visibility was down to just a few feet. We were lucky, though. Two hours later the interstate shut down. We found a fun little Cajun place for lunch and got drenched. Then we got drenched again when we went back to the hotel.

To this point, the rain had just been an annoyance. I mourned for Emily's romantic gazebo wedding and my hair which was permanently fuzzy, but I didn't realize we were on the cusp of a major disaster. The first inkling came when Patricia called me while we were getting dressed for the wedding. She and Dad had left early and discovered the main road between Cool Springs, where our hotel was, and Franklin, where the wedding was, was closed due to high water.

I went into full panic mode...which is a nice way of saying I turned into a raving lunatic. For an hour or so, I believed I was going to miss my brother's wedding. I threw dress clothes at my kids and barked at them. I abandoned all attempts to tame my humidified hair (forever immortalized in the wedding photos). Bruce went to the car supposedly to pull it under the portico, but mostly, I suspect, to get away from his temporarily insane wife.

Thank God we keep an old Rand-McNally travel atlas in the car. The GPS was so completely flummoxed as we ignored her directions that we had to turn her off. I'm pretty sure I called her a bitch and told her to shut up. A combination of the map and Patricia's instructions got us around the closed roads and to the wedding on time. The drive was sobering, though. Lawns had become lakes, drainage ditches, rivers. Cars were stalled and submerged on side roads already flooded and impassable. I've never been more thankful for my big, honkin', gas-guzzling SUV than I was last weekend.

By the time we got into CJ's, I was damp, fuzzy-headed, and frazzled, but glory, hallelujah, we made it!

Plan A (romantic garden and gazebo) had been abandoned early in the day. Plan B (covered pavilion) was considered and abandoned as the rain fell sideways and created a river inside the pavilion. Plan C put the wedding in the foyer of CJ's. In spite of being cramped and a bit hot, it was, hands down, the most romantic wedding I've ever been to, and that includes my own.

Every great romance requires the hero and heroine to overcome obstacles and earn their happily ever after. Allen and Emily found each other after September 11th sent them both back home to Nashville. Allen had moved to Austin a year earlier for work, and Emily had moved to New York, looking for adventure. Standing on a bridge between New York and New Jersey as the twin towers crumbled was more adventure than she wanted. The tragedy brought them home, and within a year, they were dating.

The first time I met Emily was at my mother's funeral. Imagine having to meet your boyfriend's family under those circumstances. I liked her immediately, and even in the midst of my grief, I knew she was perfect for my brother. Emily and Allen have met every obstacle, one particularly major, with grace, and more importantly, together.

When Allen said he would have swum to CJ's if necessary, I believed him. The garden wedding would have been nice, but both my brother and Emily knew the only thing that really mattered was getting married. Their happiness was contagious, and everyone crammed into that stuffy foyer was joyous. I cried from the first note sung by one of Emily's bridesmaids right through the recessional. Even my eldest son admitted to getting misty during the ceremony. The love was tangible. 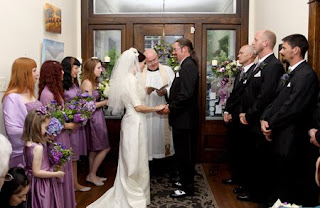 I finally got to meet my brother's eclectic group of friends, and it was obvious that they have all been inspired by Allen and Emily. The best man, Bob, made me cry with his toast at the rehearsal dinner. (Have I mentioned I'm a total sap for romance?) Bob is an accomplished chef. He works regularly in New Orleans and Maine. He also regularly takes off at a moment's notice to some remote part the world. He is a man of many stories, including one in which he flirted with Laura Bush. The story is his, so I'll skip the details. I will say it involved chocolate. Bob can also claim two paintings of Clint Eastwood on the wall at Roberts. They're right by the door if you go.

Bob noted in his toast what a good friend Allen had been to him and how Emily was cut from the same cloth. His words were simple and spoken from the heart, and he made me proud to be Allen's sister. I felt the same way when his friend, Zach, spoke at the reception. Zach plays guitar and has travelled the world on tour with Kenny Chesney.

Zach said, "I've been to a lot of weddings, but I've never been happier to be at a wedding than I am to be here now. Emily and Allen were meant to be together."

The thing about happily ever after is that you don't just earn it once. You have to keep earning it for the rest of your life. The obstacles never stop coming, and they don't get easier to overcome. I feel certain Allen and Emily will weather any storm life throws at them with the same grace they weathered the storm that threatened to ruin their wedding, but didn't.

The vibe was so happy and positive that the rains couldn't quench it. Only one road was open out of Franklin when we finally left, but our joy for Emily and Allen wasn't dampened. The next morning it was evident the rain had gone from epic to apocalyptic, but even the seven hour drive home (it normally takes three and a half) didn't make us sorry we went.


Many waters cannot quench love, neither can the floods drown it. 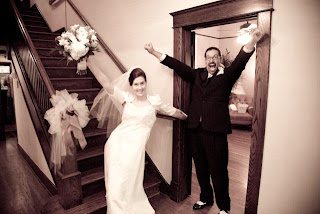 Email ThisBlogThis!Share to TwitterShare to FacebookShare to Pinterest
Labels: sharing the joy